“There emerges from their stomachs (i.e. of bees) a drink of various hues. In it is cure for mankind. What! Do you not reflect (and derive lesson)?” (Qur’aan)

The first recorded use of honey as a medicinal treatment was 3,000 years ago in Egypt. Since then, honey has been found to:

Improve digestion – Use a tablespoon or two to counteract indigestion.
Relieve nausea – Mix honey with ginger and lemon juice to help counteract nausea.
Treat acne – It can be used as a face cleanser to fight off acne and is gentle on all skin types. Take half a teaspoon, warm between hands and spread on face gently. Leave on for 10 minutes, and then rinse with warm water and pat dry.
Lower cholesterol.
Improve circulation – Raw honey makes your brain function optimal by strengthening the heart and improving blood circulation.

Reduce insomnia – Add a tablespoon to warm milk to help increase melatonin output and help you sleep.
Provide probiotic support – Raw honey is full of natural probiotics which promote the growth of good bacteria in the gut.
Treat allergies – If sourced locally, raw honey can help reduce seasonal allergies.
Moisturize skin – A spoonful of raw honey mixed with olive oil and a squeeze of lemon can be used as a hydrating lotion.
Treat eczema – Use it as a topical mixture of equal parts of honey and cinnamon.
Reduce inflammation – Raw honey has anti-inflammatory agents that can treat respiratory conditions such as asthma.
Help wounds heal – Raw honey used topically can help speed healing time for mild burns, wounds, rashes and abrasions.
Treat urinary tract infections – Due to its antibacterial properties.
Relieve sore throat – Mix with lemon or peppermint oil for fast acting benefits or add to tea.
(https://beforeitsnews.com/r2/?url=http://www.offthegridnews.com/alternative-health/7-old-fashioned-grandma-approved-health-remedies-that-actually-do-work/)

“From their stomachs (of bees) there emerges a liquid of a variety of colours. In which there is cure for mankind. In this is a Sign for people of Intelligence.” (Qur’aan)

Regarding the Shifaa (Curing property) of honey, non-Muslim experts and researchers say:

Honey has long been used as a home remedy for coughs.

(CNN)Honey may be a better treatment for coughs and colds than over-the-counter medicines, a new study has found.

Researchers said honey was more effective in relieving the symptoms of cold and flu-like illnesses than the usual commercial remedies, and could provide a safer, cheaper and more readily available alternative to antibiotics.

They encouraged doctors to consider recommending it to patients in place of prescribing antibiotics, which can cause side effects and lead to antibiotic resistance when overused.

The proven health benefits of honey

Honey has long been used as a home remedy for coughs, but its effectiveness in treating common illnesses has not been heavily researched.

“Honey was superior to usual care for the improvement of symptoms of upper respiratory tract infections,” they wrote in the journal BMJ Evidence-Based Medicine.

“It provides a widely available and cheap alternative to antibiotics. Honey could help efforts to slow the spread of antimicrobial resistance, but further high quality, placebo controlled trials are needed.”

Researchers compiled the results of 14 studies, nine of which only involved children. Most compared honey with more conventional treatments like over-the-counter medicines.

When they looked at studies comparing honey with a placebo, however, the authors were unable to reach the same conclusion as they did when looking at the other comparative studies. They said more research should be done on that comparison.

The UK’s public health bodies have repeatedly warned of the dangers of overusing antibiotics. In 2018, they said that millions of surgical procedures could become life-threatening if the effect of antibiotics is diminished through over-prescription.

“Since the majority of URTIs are viral, antibiotic prescription is both ineffective and inappropriate,” the study’s authors wrote. “However, a lack of effective alternatives, as well as a desire to preserve the patient-doctor relationship, both contribute to antibiotic over prescription.”

Superbugs ‘as big a global threat as climate change and warfare’

A large catalog of previous research has proven that honey has the power to kill bacteria. Studies have shown that it is effective against dozens of strains, including E. coli and salmonella.

A specific type of honey from New Zealand, called manuka, and Malaysian tualang honey have been shown to fight staph and the digestive bacteria responsible for peptic ulcers, H. pylori.

And another study of 139 children found that honey did a better job of easing nighttime coughs and improving sleep than both the popular cough suppressant dextromethorphan and the antihistaminediphenhydramine (often sold under the brand name Benadryl).

As far as the People of Imaan are concerned, there is no doubt and ambiguity in the curing property of honey. It is not a question of “honey may be better”. Since the Qur’aan Majeed explicitly and emphatically asserts the Shifaa’ of honey, there can be absolutely no doubt in honey being the best medicine for many illnesses.

Muslims need to develop Yaqeen in the Kalaam of Allah Ta’ala. However, deficiency in Imaan negates Yaqeen which is attainable only by strict observance of the Shariah in every department of life. 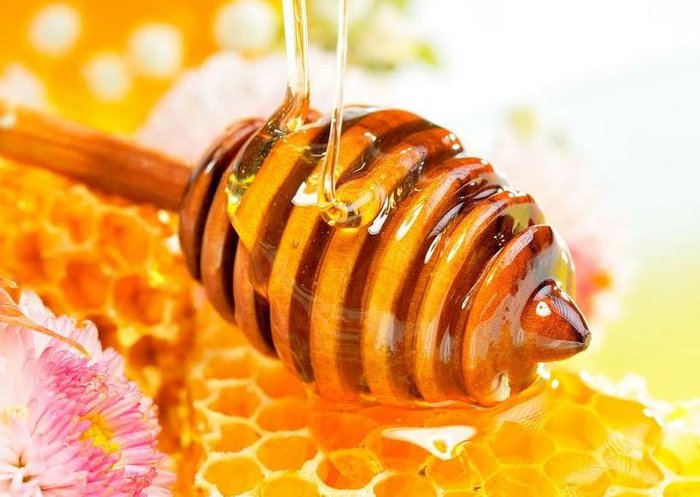 Honey is truly called the liquid gold because of its striking formulation. But these benefits of honey have just been discovered by new age science while the benefits of honey in Islam have been described in the Quran which dates back to many years ago.

Honey is one of the foods of paradise and the Quran clearly talks about rivers of honey flowing in Jannah.

Allah, the Almighty, has placed so much importance and shifa in Honey that he revealed an entire Surah by the name of Bees – Surah Al Nahl in which he says,

Your Lord revealed to the bees: “Build dwellings in the mountains and the trees, and also in the structures which men erect. Then eat from every kind of fruit and travel the paths of your Lord, which have been made easy for you to follow.” From inside them comes a drink of varying colours, containing healing for mankind. There is certainly a Sign in that for people who reflect. (Qur’an, 16:69)

Note the use of words “Healing for Mankind.”

Allah subhanahu wa ta’la ordered the bees to make honey which will be the healing for mankind. Let’s look upon the miracle of honey .

Miracles of Honey
Vitamins – B1, B2, C, B6, B5 and B3, niacin, riboflavin and pantothenic acid.
Minerals – calcium, copper, iron, magnesium, manganese, phosphorus, potassium and zinc
Amino acids.
Antioxidants – Pinocembrin, pinobaxin, chrisin and galagin
Flavonoids and
Phenolic acids.
The Prophet Muhammad once said,
“By Him in whose hand is my soul, eat honey, for there is no house in which honey is kept for which the angels will not ask for mercy. If a person eats honey, a thousand remedies enter his stomach, and a million diseases will come out. If a man dies and honey is found within him, fire will not touch his body.”
– Chaghhayni M. Tibb al-nabbi. Trans. C Elgood. Osiris 1962; 14: 188; Chisti SHM. The Sufi Book of Healing. Rochester, Vermont: Inner Traditions International: 59


While these are the nutritional wonders of honey, many researchers are discovering the health benefits of honey which include the following:

Helps the intestine and kidneys to function well.
Gives a quick energy by diffusing in blood within 7 minutes.
Free sugar molecules help in better functioning of the brain.
Purifies blood and helps in good blood circulation.
Protects from capillary problems and arteriosclerosis.
Makes the environment incapable for growth of bacteria.
Anti-aging properties for healthy skin.
Fights high cholesterol.
Health benefits of honey also circulate to us through hadeeth, many of which recommend honey as medicine providing cure for many diseases and a complete shifa.

Coming back to the words written in the Quran about honey and healing, honey is proven by the doctors to be a painless method to heal burns and infections. Not just that, but honey helps in the growth of new cell tissues thus providing a complete healing. This is a huge miracle of honey.

Subhan Allah, the words of Allah and his Prophet are definitely true. And thus, we see how Allah has blessed us with one of his many wonders that lie in honey.

via The Benefits Of Raw Honey