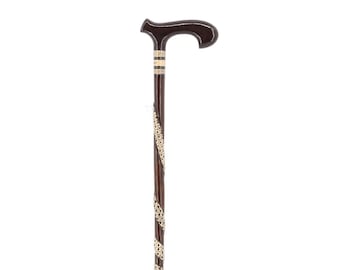 Allamah Qurtubi (r.a.) has mentioned the following
• Shaytaan flees from a believer when he has an ‘Asa
• Evil people and hypocrites are awed by him
• It could be used as a sutrah in salah
• It is a source of relief when tired

Sayyiduna Abdullah Ibn Unays (r.a.) narrates that when he came to Nabi (sallallahu alaihi wa sallam) he was leaning on an ‘Asa’, and Nabi (sallallahu alaihi wa sallam) gave this ‘Asa’ to him and instructed him to use it, saying that people who use the ‘Asa will number very few on the day of Judgement. Tabrani / Sirat Vol.7 Page 589
When this Sahabi passed away, the ‘Asa of Nabi was buried with him, as a source of blessings. – Musannaf Vol. 3 Page 185
(Taken from As-Shamaa’il al-Kubra by Mufti Muhammad Irshad Qasmi
al-Nawawi (r.a.) mentions that al-Shafi`i (r.a.) used a walking stick for which he was asked: “Why do you carry a stick when you are neither old nor ailing?” He replied: “To remember I am only a traveller in this world.”