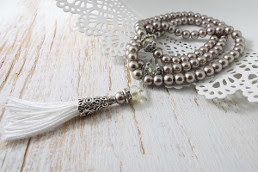 Once, a woman wrote a letter to Hazrat Shaikh Moulana Muhammad Zakariyya (rahmatullahi ‘alaih) wherein she mentioned that she began reciting Aayat Kareemah in abundance. She mentioned in the letter that after reciting the aayat in abundance for many days, she began to experience dizziness and perceived a lot of heat in her body. As a result, she felt unwell and did not know what to do.

In response, Hazrat Shaikh Moulana Muhammad Zakariyya (rahmatullahi ‘alaih) mentioned that she should rather recite durood shareef in abundance. The reason is that Aayat Kareemah is a strong wazeefah, and when recited in abundance, it creates heat in the body. As far as durood shareef is concerned, it is a wazeefah that has a moderate (and light) effect on the body.

Hazrat Sheikh (rahimahullah) thereafter mentioned that these wazeefahs should not be carried out independently at one’s own discretion, rather they should be carried out under the supervision of an experienced Sheikh. (Carrying out wazeefahs independently at one’s own discretion can have an adverse effect on one’s body and health, as one does not know the effect of the wazeefah as well as the endurance of one’s body.)