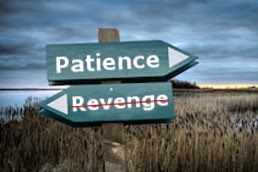 When people plot and scheme against you, then it is only natural for you to feel disappointed, hurt and grieved over their behavior. However, you should not entertain thoughts of taking revenge from these people. The reason is that the revenge of Allah Ta‘ala is far more severe. Furthermore, if you take revenge, then your revenge will be deficient, compared to Allah’s revenge, and taking revenge will also cause you to lose the immense reward of exercising sabr.

The patience which you are exercising over your challenges and difficulties will be a means of you enjoying great barakah, and Allah Ta‘ala will bless you with great bounties as well. When a Muslim exercises sabr, Allah Ta‘ala blesses him with a long life in which he receives the taufeeq to carry out good deeds. When one patiently endures difficulties in this world, Allah Ta‘ala blesses him with rewards in the Hereafter that are far better than that which he lost in this world.